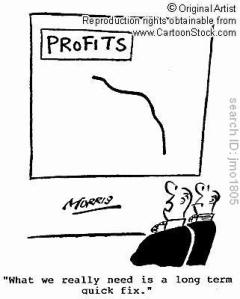 A good friend of mine just introduced me to the idea of hysteresis, which fits very well with our “school as ecosystems” framework. Essentially, hysteresis refers to the impact that a system’s history has upon its condition. The good folks at wikipedia provide an example:

“Coral reef systems can dramatically shift from pristine coral-dominated systems to degraded algae-dominated systems when populations grazing on algae decline. The 1983 crash of urchin populations in Caribbean reef systems released algae…allowing them to overgrow corals and resulting in a shift to a degraded state. When urchins rebounded, the high (pre-crash) coral cover levels did not return, indicating hysteresis .”

This is a hysteretic effect: despite the fact that some elements (the urchins) in an ecosystem (the Caribbean reefs) had returned to previous levels, the ecosystem’s history prevented the system from returning to its prior state. Phew.

Among other things, the concept of hysteresis should give us all caution. When we alter a system of any kind, the effects may be irreversible, or not reversible in the short term. For example, when we close down public schools by the dozen, then later find out that our system for rating schools bears no relation to the actual student learning, we might not be able to undo the damage.