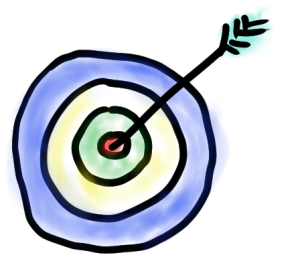 Dominic Randolph, the head of Riverdale Country Schools, and Max Ventilla, the founder of AltSchool, have written a thought provoking series of letters on Medium, on the topic of “What’s the Point of School?”

If schools took learning more seriously and aimed indirectly but intentionally, like a Zen archer, then I think they might be in quite different places.

This is an interesting way to phrase the principle of obliquity and pair it with the concept of social-psychological interventions! I agree strongly with Randolph on this. I tire of hearing leaders in education harp on shallow and direct sources of targets, such as test scores or standards or compliance rates, as if these are the ultimate drive or purpose in our work. Data and standards are only powerful when contextualized and analyzed from multiple perspectives, in consideration of the needs and interests of students and the curricular focus of the department and school. Compliance rates . . . well, that’s a baseline, not a target. Yet the messages I and other educators too often receive is that our focus should lie on such desultory targets.

How can we bring “applied anthropology” into schools so we can learn about how to more effectively construct the right culture of engaged and deep learning for our students, teachers, and parents?

People talk about the effect of a leader on a school environment or the way a particular class is difficult, but where is the science of the culture of schools?

Matt Candler’s ideas about “Tiny Schools,” in which small schools are begun as prototypical experiments, then brought to scale as they experience success, seems to be a great opportunity for such an expansion of “applied” science, most especially if the learnings from the failures of these experiments are shared transparently and openly.

I certainly hope there’s more thirst out there for such an education-specific science! I know I have this thirst myself. It’s hopeful that schools are pairing more often with academic researchers or design firms like IDEO, though I fear that such pairings end up focusing on schools and communities, like Randolph’s, that are already set up for success.

I’d perhaps be more interested in those pairings if they sought to expand the concepts of design thinking and character education to their broader community in the Bronx. How can school learning experiences build connections between students and schools of varying skills and backgrounds? And how can those connections be leveraged to actively overcome the physical and mental silos of our city and nation?