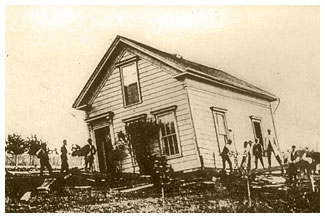 EdBuild has released a damning indictment of economic segregation in the United States. The report and interactive sheds much-needed light upon an illogical system that ensures poor kids are kept segregated by arbitrary district lines and confined to poorly resourced schools.

I urge you to read EdBuild’s full report. There’s a scathing resonance to the sentences that helps to convey how cruelly unjust and unnecessary school district lines are. Here’s one example:

“The fact, too seldom acknowledged, is that district boundaries themselves compound the inequalities that our public schools were intended to conquer. In present day America, we allow invisible lines to determine the fate of our youngest and most vulnerable citizens.”

“Our wealthy are consigning lower-income students to a lesser caste by cordoning off their wealth and hiding behind the notion of ‘local control’.”

Reading this report, I couldn’t help but think of parallels to the current political battle on NYC’s Upper West Side over potential rezoning of a school district. The rezoning would place a well-off segregated school in the same zone as a segregated school that serves the projects just down the street.

Some well-off Upper West Side parents have made statements such as:

“It’ll take thousands, maybe a hundred thousand dollars off the value of my apartment.”

“We moved here basically for that school, and that school is kind of like our right.”

Is this what a public school has become? A status symbol of the property value of a neighborhood?

Even “progressive” NYC Mayor De Blasio has defended the rights of private property owners to their own segregated public schools:

“. . . families who have made a decision to live in a certain area . . . made massive life decisions and investments because of which school their kid would go to.”

Our public schools have become de facto private schools for those with money and means. Such parents can “invest” in the property that allows them to live within the district boundaries of their chosen school. They then can rely upon hale and hardy school district boundaries to keep less fortunate kids out. In this dismal reality of the US education system, instead of a Game of Thrones, it’s the Game of School Zones. This cut throat game determines the fate of our nation, and we play it with our children.

What does a public school really stand for in this country?

Does ownership of property entitle you to be relieved of any commitment to the common good?

One thought on “EdBuild Report: Can the US overcome the ‘fault lines’ of segregation?”