The majority illusion refers to “the local impression that a specific attribute is common when the global truth is entirely different,” according to a recent article on network research on MIT Technology Review.

Kids are especially influenced by their immediate social networks, in addition to their online ones. This study suggests that we are most especially susceptible to the habits and perceptions of our more popular or well-connected acquaintances, believing that many others may be doing or thinking what they are, even when it may only reflect that of a few (big surprise). This can be understood both in its positive and negative effects:

In other words, the majority illusion can be used to trick the population into believing something that is not true.

. . . that immediately explains a number of interesting phenomena. For a start, it shows how some content can spread globally while other similar content does not—the key is to start with a small number of well-connected early adopters fooling the rest of the network into thinking it is common.

. . . Various studies have shown that teenagers consistently overestimate the amount of alcohol and drugs their friends consume. “If heavy drinkers also happen to be more popular, then people examining their friends’ drinking behavior will conclude that, on average, their friends drink more than they do,” say Lermann and co.

This points to a potential key to shifting the mindsets and behavior of an entire school: “identify the popular nodes that can create the majority illusion for the target audience. These influencerati must then be persuaded to adopt the desired behavior or product.”

Get the most well-connected kids sold on the importance of learning and reading first. You might then see a big shift in the attitudes of others. 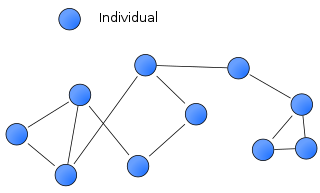 —Nicholas A. Christakis, “Making Friends in New Places” in the NY Times

Like Loading...
On August 2, 2015 By mandersonIn Complex Adaptive Systems, Design, integration, Links, quotes, relationships, research, Social Networks, social-ecological systemsLeave a comment
Schools are hotbeds of dynamic relationships shaped by physical environment, community circumstances, leadership (or abdication of leadership) of adults, and the given set of policy, economic, and political contexts the school is embedded within (just to name a few).

While we tend to view schools primarily from a lens of academics, when we really get down to the tough work occurring in the trenches, we’re often (rather quixotically, I might add) attempting to instill and shift habits. Students stay up late on social media instead of completing homework, may lack motivation in achieving long term goals, play video games in lieu of studying, don’t exercise, eat junk, ad nauseam. It can be hard to get at academics when students have bad habits.

Maybe we can learn something from Vietnam War veterans and heroin addiction that could apply to schools.

In an article by James Clear on The Next Web, “Breaking Bad Habits: What we can learn from Vietnam War veterans and their heroin addictions,” we learn of a startling statistic on veterans who had been addicted to heroin in Vietnam: “when the soldiers returned to the United States only 5 percent of them became re-addicted to heroin. In other words, 95 percent eliminated their addiction nearly overnight.”

Heroin, in case you’ve been living in a hole, is an extremely addictive opioid. How did the soldiers manage to overcome their addictions? It has everything to do with environment and social relationships:

“Here is what happened in Vietnam: soldiers spent all day surrounded by a certain environment. They were inundated with the stress of war. They built friendships with fellow soldiers who were heroin users.

The moral of the story?

“The people we connect with and the places we live in often determine our behavior and habits as much as we do ourselves. [Bold added]”

A school should be an oasis providing the cool waters that can quench a child’s thirst for knowledge, hunger for companionship, and craving for novelty and fulfillment. I believe that schools should be buildings that you would want to spend a lifetime within, with natural light flooding through large windows, expanses of cool greenery and spaces designed to inspire thought and social interaction. If we want to break students away from bad habits, we need to provide the environment in which better habits can flourish.

Clear suggests that in the absence of controlling the physical environment, however, that we should focus on designing for “laziness” and make “default options healthier or more productive”

In another post that he links to, Clear gives a neat 2-step prescription for this:

If 95% of the veterans of a horrific war can come home and kick a heroin habit, then any teenager failing his or her classes can become a model student.

It just might take an entirely new kind of school.